How do people who use the Heroku Platform actually use it? What is a day in the life of a Heroku user? What does it mean “to Heroku”? Read on to find out the answers to these and other questions….

It was Jane’s first day at Universal Containers (UC). Jane’s expertise was in Ruby on Rails, as she had just graduated from a bootcamp which taught “full stack development” using Rails.

Jane was given the following user stories that she had to solve for on her first project:

Being a Rails developer, Jane started to formulate a plan based on Rails to serve content to a wide variety of users. She envisioned a rails app, backed by a PostgresSQL database. This would give her an abstraction from having to deal with coding things like an application web server, application request router, and layout engine. All of that and more comes out of the box with Rails!

Jane fired up her tool of choice, Terminal.app, and got started: 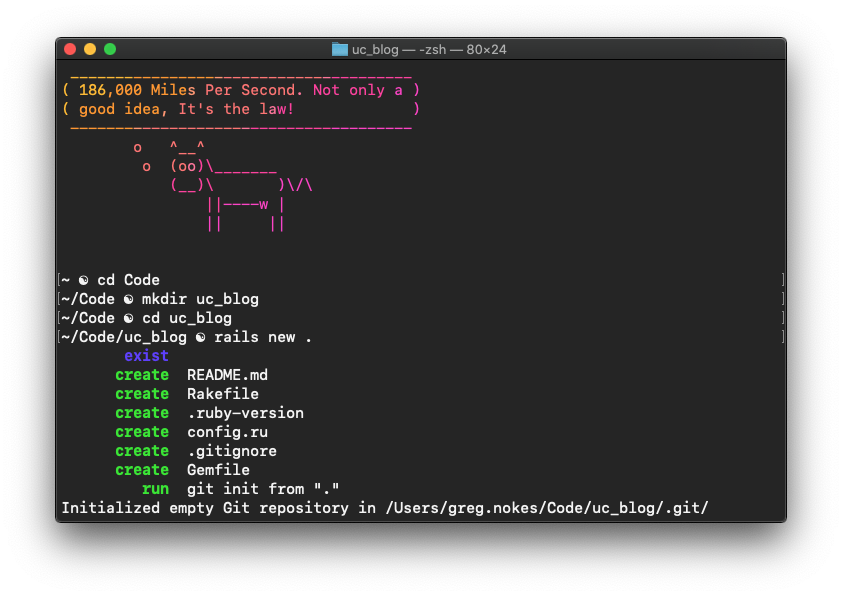 Next, Jane went to www.heroku.com and signed up for an account, and downloaded the Heroku CLI to her new machine.

She then decided to set up a CI/CD Pipeline to help her with her development work, so she consulted the devcenter and searched for CI/CD. She found the article on Heroku CI. That was half of the CI/CD problem. In the article about CI/CD, she found a link to Heroku Pipelines and that completed the equation for her.

Using this she would be able to use automated unit tests on her code, and deploy working branches to automatically provisioned and managed development environments! She got to work.

Her first task was to set up her first app. She decided to start with the staging environment, as the production app would be added after User Acceptance Testing (UAT)

She returned to her trusty command line.

She first needed to commit the initial framework of the Rails app to git. Jane knew that using git and Github was a best practice, and it would allow her to leverage advanced Github and Heroku integrations later.

She used the following commands to insure that git was set up correctly, add all of the files, and then commit them locally.

She then created a private repository on Github to hold her code: 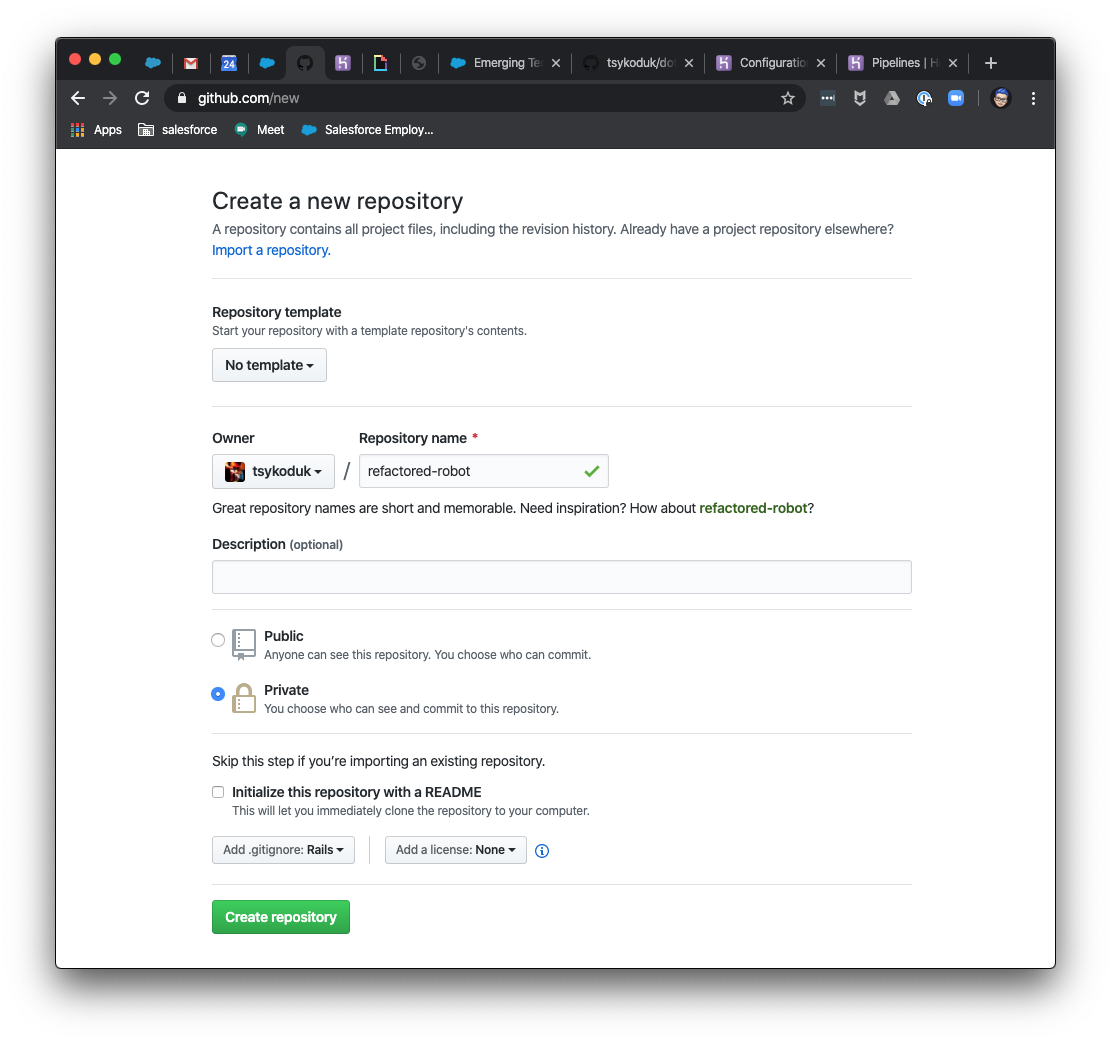 She added the git remote and pushed her code to Github:

And that was all there was to that! She had just done all of the work needed to setup the environment to build, run and manage her application.

Time to grab a cup of coffee!

When Jane got back from meeting some of her new coworkers and getting some coffee, she put her headphones back on. She had a bit to do before lunch!

She decided that she would first deploy the skeleton of the app, and then set up Pipelines and Review Apps, and then hook it all together with Github.

Jane first headed over to the Elements Marketplace, as she knew that her application would need some backing services. She knew that she would need PostgresSQL, and a logging tool. She also chose to install a Redis instance, as she could. use that as a cache with Rails to speed up application performance. With that knowledge in hand, she switched back to her Terminal used the Heroku CLI to provision Postgres:

And next up was Redis:

That would give her new Rails app what it needed to be successful from the start!

Now it was time to package up her code, send it to the build environment, and then move the assembled slug into a container.

Her new app was up and running. She opened a web browser and browsed to the new app’s address: 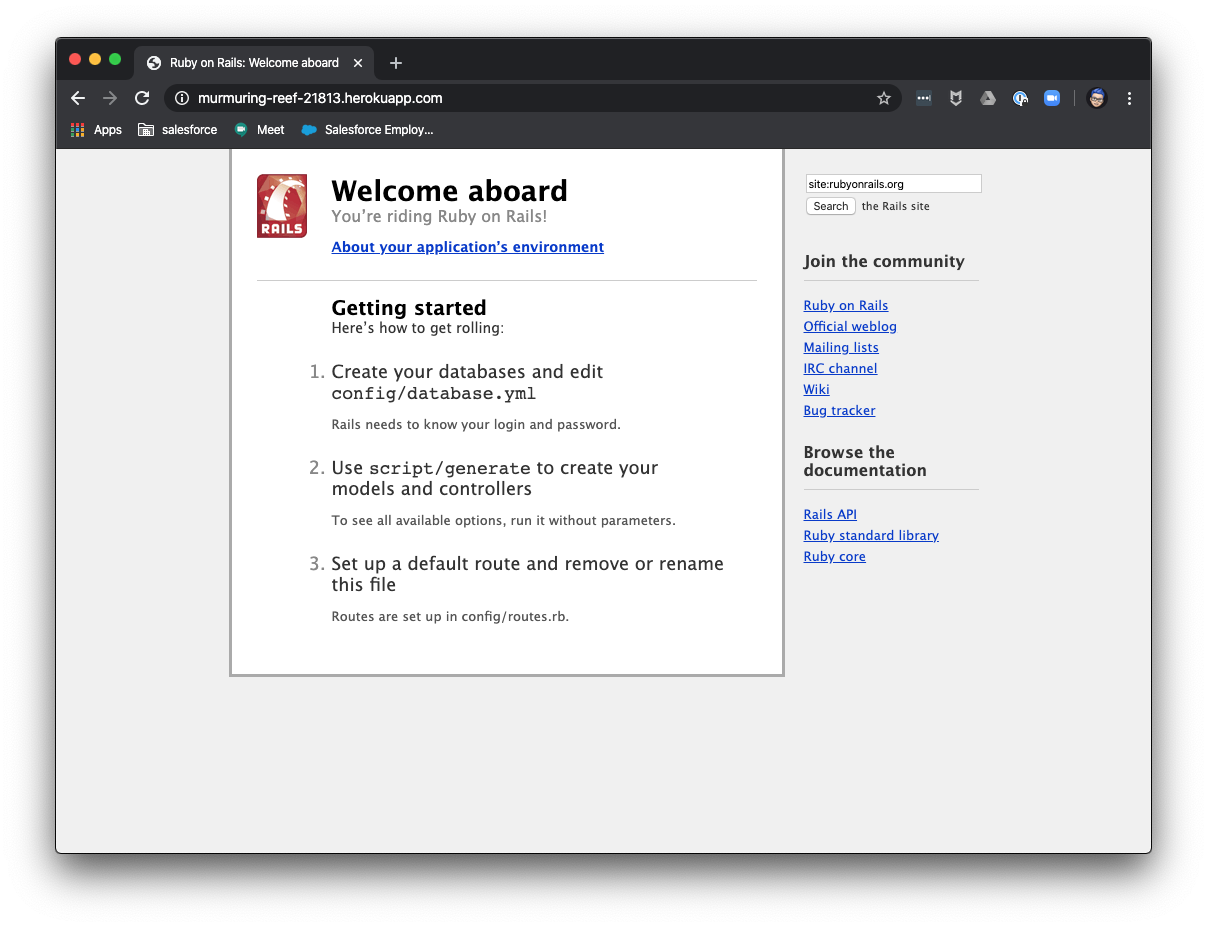 Her final task was to set up the pipeline and development environments. She knew that she would have to create a pipeline, integrate it with GitHub, and enable CI and Review Apps.

She opened the dashboard, and selected the new app. She then selected Create a Pipeline. She then answered a few questions, and the pipeline was created for her. 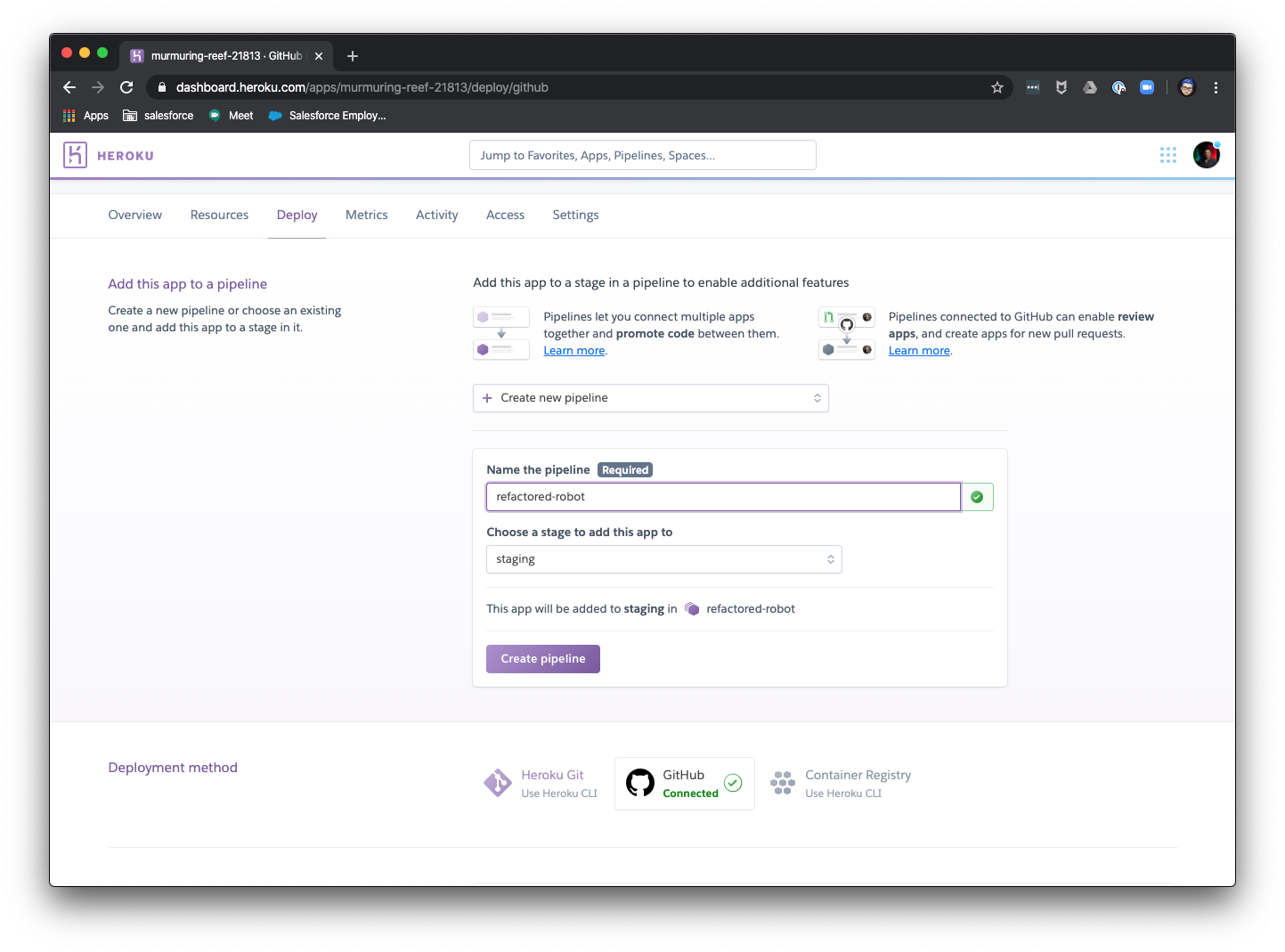 Next she clicked on the Enable Review Apps button, and selected a few options 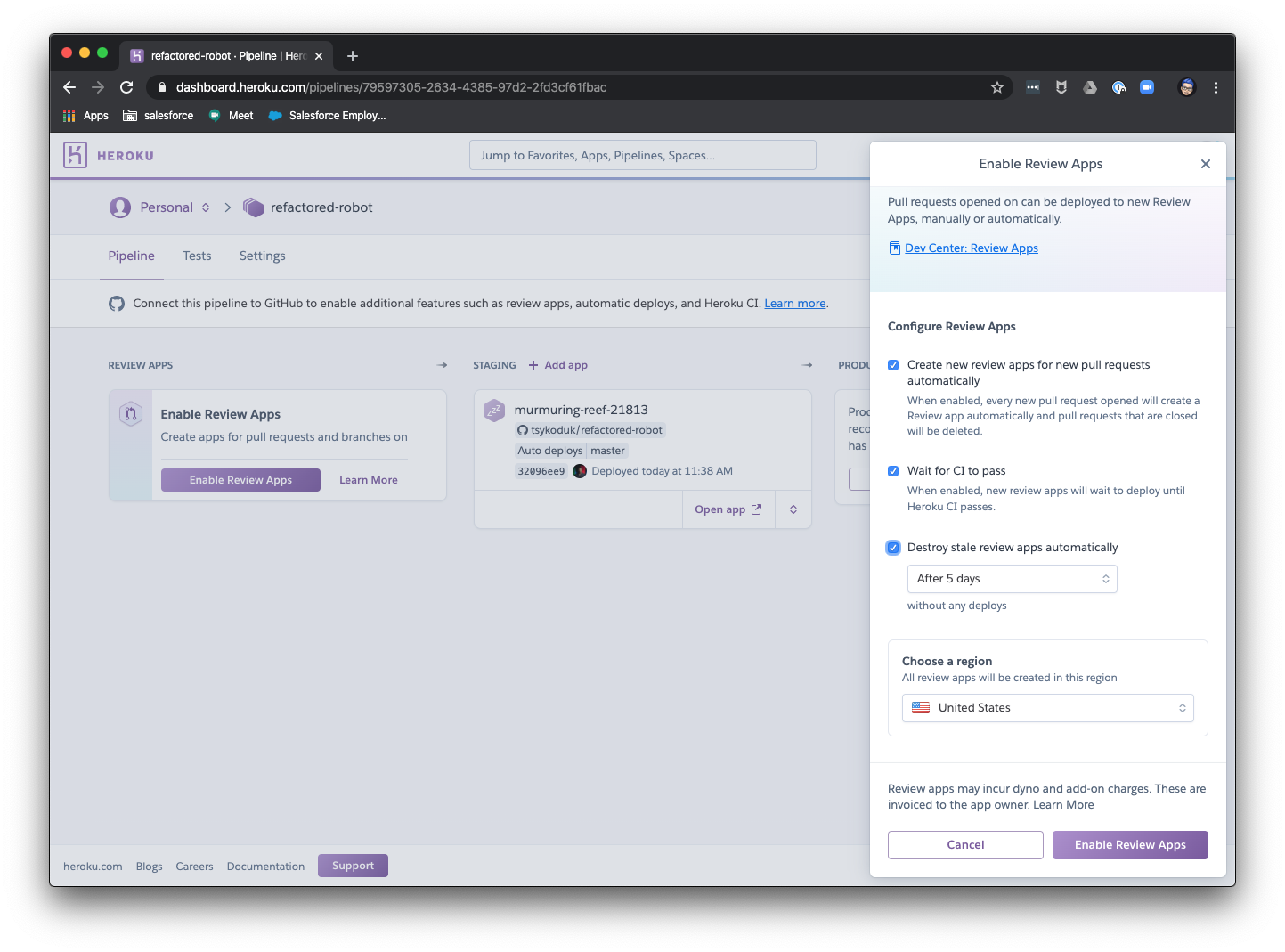 Next, she clicked on Enable CI 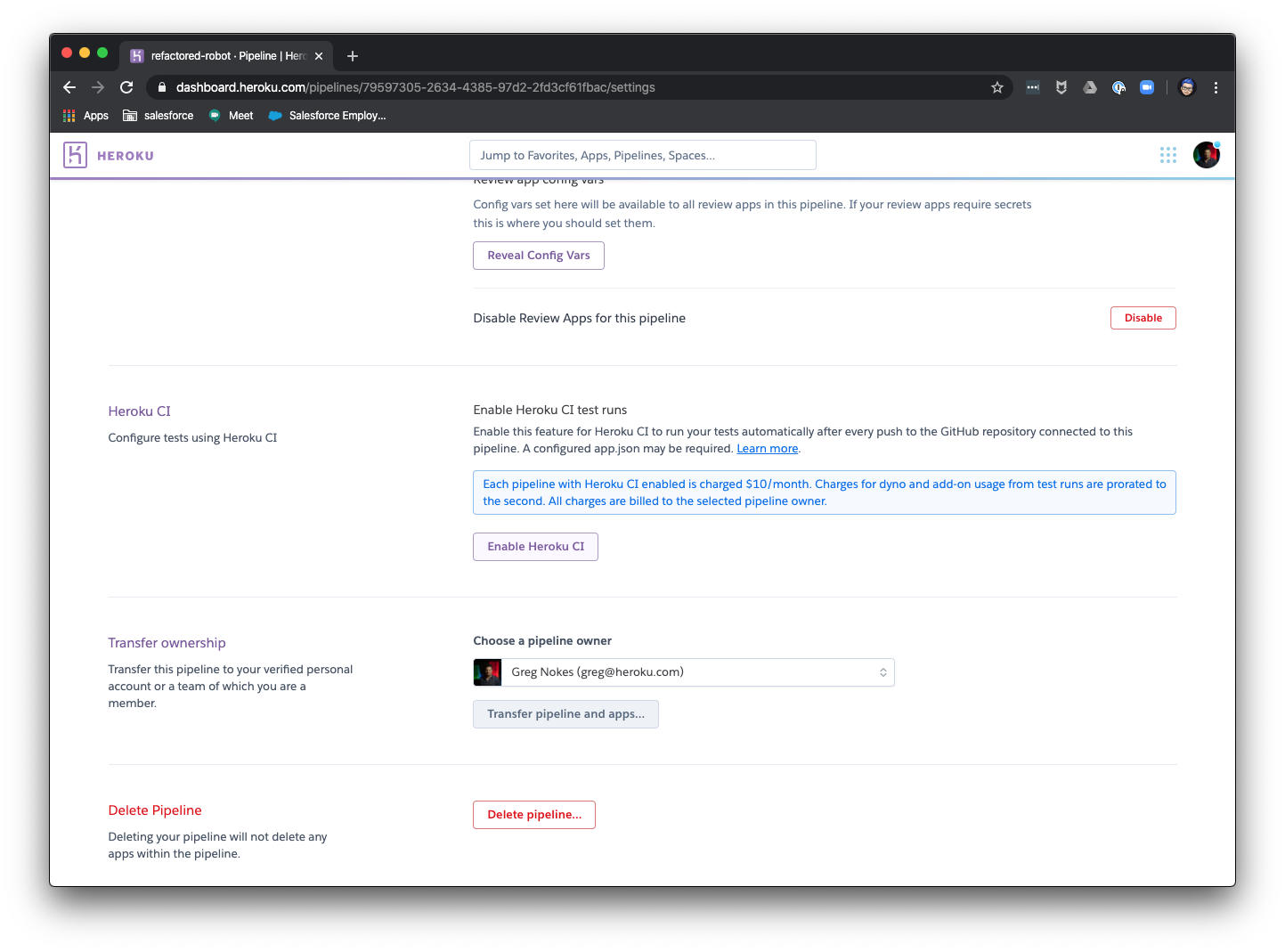 All done. In the course of a single morning, and on her first day at work, Jane had set up a Heroku App and all of the load balancers, build environments, containers that allow someone to run an application on the internet. She had also configured and set up a full CI/CD pipeline including GitHub integration.

Now she could roll up her sleeves, and get started building the app.